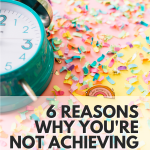 Setting and achieving goals can be one of the hardest things to do in your life. Most of the time it’s because you’ve tried to set goals in the past but have rarely actually achieved them. This in turn deters you from setting any more goals in the future.

I used to fit in this category as well before I learned how to not only set a goal but how to organize it and actually reach my end desire.

So, lets break this down into the top 8 reasons why your goal has remained just that, a goal.

You may have set a goal but your start date to begin your journey to actually achieving it keeps getting pushed back. Maybe you want to lose 20 pounds, but you ate a piece of cake today, so you tell yourself that you’ll start working out next week. Maybe you have a goal to start a business, but you keep telling yourself it’s not the right time. Maybe you want to run a 5 K but come up with 17.6 billion excuses why you don’t have time to use the treadmill in your garage. (Guilty on that one!)

Let me give you some inspirational stories.

Walt Disney was fired from the Kansas City Star because his boss felt that he, “lacked imagination and had no good ideas.”

Stephan King’s most successful book, Carrie, was rejected by 30 publishers.

Oprah Winfrey was fried from a TV job and was told she was “unfit for television.”

Colonel Sanders was rejected by 1009 people when he pitched his chicken recipe to restaurants at 62.

Thomas Edison was told by his teachers that he was “too stupid to learn anything.”

Abraham Lincoln went to war a captain and returned a private which is the lowest military rank. He also tried and failed at multiple business attempts along with multiple political runs before he became President.

Those are just to name a few. If you want more just go look up Jerry Seinfeld, Theodor Seuss Geisel, Vincent Van Gogh, Elvis Presley, Michael Jordan, Charles Darwin, and so much more.

With social media at our fingertips it’s no wonder we all get easily distracted multiple times a day. Because of this we waste time and then complain we don’t have time to chase our dreams. To be honest this is our own fault and we have to get more disciplined. It’s really that simple.

4. Your Goal is Too Broad

When you set a goal and make it too broad it becomes a dream or fantasy and it stays just that. For example, I want to start a business. Ok, what business, when, why, where? You’re goal needs to be big but specific.

Let me give you some examples.

I will start a clothing business online and sale 50 shirts before the end of 2021.

I will become a speaker and talk at 2 conferences before the end of 2021.

5. Your Big Goal Isn’t Broken Down

Having a big goal is a great first step, but you can’t let it stop there. You need to now take that BIG goal and break it down into Mini Goals and then break your mini goals down into actionable steps.

This may be confusing for you but don’t worry. I’ve broken this down in a clear and comprehensive system called the ACHIEVE Goal Setting Method. To learn more about it and get the free printable to walk you through how to set and achieve your goal read my post ‘How the Achieve Method Will Help You Actually Reach Your Goal.’

If you have people in your life that aren’t supporting you during your journey to reach your goal, then you need to either drop those people like a bad habit, or just stop telling them about your dreams/goals.

As cliché as it sounds, haters gunna hate. It’s the inevitable truth so buckle up and get ready for it. The thing is, that doesn’t mean you have to accept it and allow it to continue in your life. You’re allowed to cut those people off or find a new person to talk about your dreams to.

You and your dream deserve encouragement, support, and love. Don’t forget that.

Setting and achieving goals are a great way to get you from point A to point B in your life, but that doesn’t make it easy. If you’ve found yourself struggling to reach your goals, then you most likely are falling into one or more of these categories. Moving forward work on changing these struggles and remember to take it one day at a time, Most importantly though, BELIVE IN YOURSELF!

On our way to go grocery shopping today the kids a

She’s back to brunette! I may have cried when I

Tips for when you’re feeling triggered or experi

My neighbors boroughs me a new pride flag! #pride

When you start calling out the church for their to