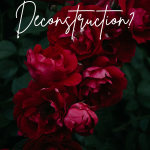 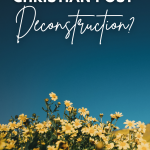 So, during my deconstruction the thing I’ve been asked the most is, “Are you still a Christian?” Now I understand why this question is asked. It’s usually one of two things. Either its people wanting me to say no so they can point to deconstruction being evil and from the devil, or it’s from people trying to get a gage on what may happen if they allow themselves to start deconstructing their own beliefs.

But the thing is, the answer just isn’t that simple. For a long time, there was a part of me that wanted to hold onto the label because it’s comfortable, heck its everything I’ve ever known. There’s also the petty side of me that so desperately wants to hold onto the label with a death grip because it makes so many evangelical Christians mad that I call myself a Christian while being Bi and proud, affirming to the LGBTQIA community, pro-choice, and a democrat.

On the other hand, I know that theologically I’m on a completely different playing field than “most” Christians but it’s not like Evangelicals have a monopoly on the “Christian” label. (They may think they do, but they don’t.)

As I’ve deconstructed and come into my own, I’ve gotten better at voicing my truth without shame. Now don’t get me wrong, I’m still nervous as hell before each post. I still have many evangelical Christians in my life that very much don’t agree with many, if not all, of my changes the past few years. So, with each blog post, Tik Tok, or Reel where I share another part of my deconstruction and allow myself to be vulnerable, I know that it will make it to those loved ones. That will make anyone nervous. But the absence of fear isn’t bravery. The ability to keep going despite your fear, is.

So, does writing this post make me nervous? Hell yes it does. Why? Because this will be the first time I publicly say, No, I don’t consider myself a “Christian.” (At least not an evangelical Christian.)

(All the Christians just grabbed their pearls.)

Now before you go casting stones and screaming “I knew deconstruction was evil.” Let me explain.

There are many reasons I’ve decided to drop the standard Christian label, but I’ll sum it up for you. Over the last 4-5 years (much longer, but the last 4-5 years have been bad) the Evangelical Christian community has soiled the name of Jesus. They tied themselves to politics, believed in outrageous conspiracy theories, ignored the social injustices in our society, and basically threw out all of Jesus’s teachings and spewed hate while screaming it was love.

As much as I want to say, “This was never Christianity.” I can’t because it is and always has been. America was colonized, tribes were slaughtered, kids were murdered, women were raped, all in the name of Christianity. This is our history, steeped in white supremacy and loads of misogyny.

That’s not the God I believe in.

I don’t consider myself a “Christian” because I don’t believe in a misogynistic, white supremist, egotistical, and homophobic, God like the evangelical Christians do.

So, what do I consider myself?

If I had to put a label on it, I guess I’d call myself an agnostic who loves Jesus. So, I guess if push came to shove maybe an agnostic Christian. I believe in a God, just not the Evangelical God.

My vision of God and a higher power is changing and I’m allowing myself to let it grow and develop as I do.

« No, I’m Not Grateful For My Trauma
Setting Boundaries During Deconstruction »