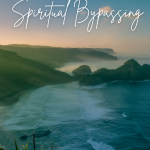 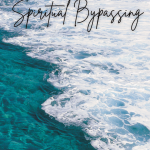 “The tendency to use spiritual ideas and practices to sidestep or avoid facing unresolved emotional issues, psychological wounds, and unfinished developmental tasks.”-Wikipedia

When churches experience scandals, hardships, or anything that sparks negative emotions they use spiritual bypassing to avoid those exact emotions.

Let me give you some examples.

“God works all things for good.”

A woman is struggling with infertility and it’s causing her to become depressed.

“God has a plan. His ways are higher than our ways.”

A pastor is caught cheating on his wife or being inappropriate with other females other than his wife.

“Don’t forget all the good he has done for the kingdom of God.”

A huge scandal came to light after a decade.

“It happened so long ago and they’ve done so much good.”

“This is going to hurt the kingdom of God, we need to just move on.”

“He asked for forgiveness and the Bible tells us we have to forgive.”

Someone is struggling with a mental disorder like depression, anxiety, and more.

“You just need to pray more.”

There are so many more examples I could give you, but I think you get the picture.

All these situations bypass the real issue at hand leaving people unable to properly process through their negative emotions. At the same time, it conditions them to accept toxic and abusive behavior because “everyone’s human” or “they asked for forgiveness.”

I just finished the documentary on Discovery Plus about Hillsong the Mega Church. It was a great documentary and if you haven’t seen it, I highly recommend it.

But as I was watching it, I realized just how much Hillsong used Spiritual Bypassing to try to minimize their MANY scandals.

Just days before the documentary was released Brian Houston resigned from the church because of inappropriate behavior with 2 females who had issued complaints. (Mind you, these issues came in the last 10 years and yet the church is just now forcing him to resign. Suspicious…)

Well, after Brian resigned, the church came out with a statement and while they were explaining what was happening, they quickly redirect the reader to remember just how much Brian and his wife have done for God.

That is textbook spiritual bypassing.

The emotions of a scandal with the founder of a mega church provokes huge emotions, none of which are good. So instead of facing the music, sitting with the emotions, and letting people process through their emotions, they decide to redirect and minimize.

A way that Christians try to distance themselves from people who don’t act, preach, behave, or believe in God/Religion like they do, is by saying something to the effect of, “They aren’t real Christians.”

This is basically saying that since a specific person says, does, or believes something they don’t agree with then it automatically means they aren’t a “real Christian.” This is said to me all the time when I call out the abusive and toxic behavior by pastors or The Church as a whole. Since they don’t agree with me, or I would dare speak out about the Church then I’m not a real Christian. This is there way and distancing themselves from the real issue giving them permission to just bypass it instead of actually address it.