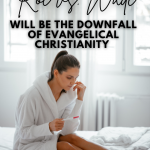 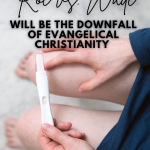 I used to pray for this day to come. I cried for this day. I begged God to end the “senseless murder of babies.”

I was even one of the crazy ones who stood outside Planned Parenthood locations wearing bright red duct tape over my mouth with the word LIFE written on it in black. During these “protests” I would walk back and forth in their parking lot in the brutal Texas heat praying, listening to worship music and even at times dancing. Yes, I jumped around like a drunken money IN PUBLIC!!

I cried, a lot. Not happy tears or tears of joy. These were tears full of anger, sadness, and fear.

It had been over 10 years since I stood in front of any Planned Parenthood with that tape across my mouth and a lot has changed.

I’m not the same person.

I see the gray in issues I was taught were black and white.

I see the lies and hypocrisy in the things I was taught were “truth.”

I see others as fellow humans through the eyes of love and acceptance instead of judgement and condemnation.

I sat here on June 24th and watched as Christians celebrated the overturning of Roe v Wade.

I watched the GOP praise the Supreme Court ruling.

I watched as states with Trigger Laws started banning abortion across the USA.

Over the next few days, the stories I feared started making headlines.

10-year-old rape victim falls pregnant, doesn’t find out till 6 weeks 3 days leaving here to go out of state to get an abortion.

Woman comes to the hospital with an ectopic pregnancy only to sit in a hospital bed for hours while her doctor calls lawyers to figure out how he can proceed. Her fallopian tub ruptured, and they finally put her in surgery. They waited so long she lost 100cc of blood.

How is this pro-life?

How does this show God’s love to our fellow humans?

All these uterus owners watched as you praised the fact, they lost bodily autonomy.

They watched as you saw their tears and turned around to scream in celebration.

They watched as you screamed murder when they stood for women’s rights.

How about we just read the words of former pastor Chad Thilbodeaux to understand why so many of us believe this will be a turning point in the history of the evangelical church.

“I wish I was still a pastor.

A headline on one of my Facebook friends’ posts yesterday was “Today’s Supreme Court decision was a MAJOR win for God.”

A win for God?

I immediately thought, does he think our God is so feeble that he needs a panel of nine men and women to affirm him and bestow favor on him?

Regardless of where you stand on the issue of abortion, yesterday’s decision has proven to be a terrible day for God and His church. Why? Because so many of the people that make up His church are deciding to act anything but Christlike.

On the day the Supreme Court overturned Roe v. Wade, so many in the church began waiving victory flags for Jesus, while the enemy was using your actions to turn more and more people off to God.

This wasn’t a win for the church.

In fact, I believe history will show that this decision was a tipping point for the downfall of church attendance and effectiveness. No one on the opposite side of the decision felt the love, compassion, and ministry of Jesus yesterday. No one.

Let me be blunt.

If you are a Christian who believes in a God who will condemn people to hell for not believing in Him and you’re choosing to spew hate and vile towards people you disagree with, then you, my friend, have more blood on your hands than any person who chose to get an abortion.

It’s time for the separation of church and hate.

The church is the richest organization in the world. We have more money than Apple, Jeff Bezos, and Elon Musk. If we really cared about babies, we could do something about it.

I am hoping when I attend church on Sunday there is a line around the corner for the church to volunteer to adopt and foster. That’s what you do when you really care about babies.

I hope there are special offerings taken on Sunday to raise money for diapers, formula, babysitting, and therapy, because that’s what you do when you really care about babies.

I hope every church that offers preschool will now do so at no charge, because that’s what you do when you really care about babies.

Where is the love and compassion for women?

Where is the Christ-like behavior?

Where is the empathetic understanding that this decision, even if you agree with it, has placed real fear in the hearts of so many?

Church, remember why you exist. It’s not so you can consistently get your way politically. It’s so you can introduce people to a God who loves and cares for them. It’s time to confuse people on where you stand politically and give them the unconditional grace that God gave to you.

You only have ONE LIFE. You might as well MAKE IT COUNT.”

The church has lost their way.

A long time ago they decided that political power was more important than living like Jesus.

They took their agenda and ran full force with it without any consideration to those they hurt along the way.

Many of us saw it and walked away. Whether that’s from the church or Christianity as a whole.

This is just the beginning. The more the church embraces Christian Nationalism, flaunts their racism, and spews homophobia the more people will walk away.

On our way to go grocery shopping today the kids a

She’s back to brunette! I may have cried when I

Tips for when you’re feeling triggered or experi

My neighbors boroughs me a new pride flag! #pride

When you start calling out the church for their to