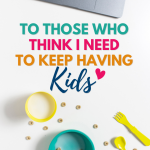 Growing up I never had a magic number in my head on how many kids I wanted. All I knew was that I wanted kids and more than one but that was about it. I grew up getting along with my siblings, for the most part, so I knew I wanted my kids to have brothers and sisters as well.

Other people had specific numbers. Some wanted two, three, four, or even five. Some didn’t have a number and would just say they wanted a big family. Some didn’t want kids at all. To each their own. You want one kid, great. You want a huge family and are pushing to compete with the Duggers, great. You don’t want kids at all, great. It’s your life and your decision, and you shouldn’t let anyone try to convince you otherwise.

Having kids in general is a huge decision, like MONUMENTAL. It’s a human being people. Not only that, but it’s a lifelong commitment and job. Once you apply and get issued the title of Mother or Father it can never be revoked. Is it a wonderful job? Of course. Is it also the hardest job on the freaking planet? Most defiantly. Having kids shouldn’t be taken lightly and the amount of kids you have shouldn’t be dictated by other people and their opinions.

It wasn’t long after I had my first kid that people were asking me when I planned to have another one. The question itself seemed normal. If you have one kid, then of course you’re going to have another. Atleast that’s what made sense in my head. What shocked me was how fast I was being asked this question. My baby was under a year old and not even walking when I got asked this the first time, by a complete stranger might I add.

The older my kid got the more I was asked. I didn’t think much of it at the time because we knew we wanted another kid and we knew we wanted them to be about 2-3 years apart in age. This meant that we would start trying around the time my first turned 18 months. It didn’t take us long to get those two pink lines on the pregnancy test. We were excited to say the least.

That is until the reality of labor and delivery hit me like a ton of bricks. You see my first was born at home without any pain medications or interventions of any kind. Yes, apparently, I was a little crazy at the time. The birth went great and we had no complications, but unless you have been through natural childbirth without any kind of pain meds, then you will never understand why this caused me to have PTSD. Yeah, didn’t realize that’s what it was until I was talking with a lactation consultant after my second daughter was born.

The reality that I was going to have to walk down that road again scared me. To the point where I was having horrible anxiety. If you don’t suffer from any type or degree of anxiety, Oh God Bless you sweetheart. If you do, then you get it. I was crying myself to sleep night after night and having panic attacks multiple times a day. Apparently, I don’t handle pain, especially that degree of pain, very well.

Not only was I dealing with anxiety, but I was also having medical problems. Three different times in that pregnancy alone I was in the ER for random pains that we thought could possibly be labor. Every time I left with no answers, just a blanket “everything looks great” response. Then half way through the pregnancy I was diagnosed with complete placenta previa, meaning my placenta decided to implant directly over my cervix. This can be dangerous if you go into labor and the placenta is in the way. Basically, in a nut shell you can bleed out before making it to a hospital.

This took my anxiety from an already 10, to an off the charts number. I was put on multiple restrictions and was told it’s a waiting game from here on out. If it moved upward with my growing belly and got far enough away from my cervix then everything would be fine, but if not then I would automatically have a C-section. The C-section was honestly the least of my worries. The thing that scared me was the fact that any day or moment I could just start bleeding. Not something a pregnant woman with anxiety wants added to her plate.

Now you have a woman with PTSD, Anxiety, complete placenta previa, and to my surprise having 5x worse pregnancy symptoms than the first go around. Needless to say, I was done. VERY, VERY, DONE.

The thought of having to go through all of this again was not something I was eager to sign up for. I spoke with my husband multiple times about how I was feeling, and it was hard for him. He was one of the ones that never put a number on how many kids he wanted. He just wanted to keep having kids till he felt we had enough but wasn’t expecting to stop after only two. It was hard for him to process but he knew the decision was ultimately up to me since I was the one growing the humans.

After learning how to deal with my anxiety, my placenta moving out of the way enough to birth vaginally and having an epidural with my second birth, I decided that I would get pregnant 1 more time, but then I was calling it quits. One of the biggest reasons I decided to have one more kid was the fact that our first two were girls and I wanted to try one more time to see if we could get a boy. I knew this was a huge dream of my husbands.

Let’s fast-forward to present day. I’m currently 30 weeks pregnant with our third bundle of joy, and as most of you know, it’s another girl. Is it what we expected? Nope, defiantly not. My husband had sisters and I had sisters and brothers, so we naturally thought we would have both genders. Little did we know that it wasn’t in the cards for us.

Most people expect or try to convince me to keep going and try again for a boy, despite the words coming out of my mouth. From day 1 my husband knew I was set on this being our last pregnancy and it didn’t take long after those pink lines appeared for me to be dead set in my ways.

The day I hit 5 weeks pregnant morning sickness reared its ugly head and brought with it the cement I used to solidify my decision that this was our last pregnancy. I’m not sure why, neither do the doctors, but every pregnancy has gotten worse and worse for me. All pregnancy symptoms like sciatic nerve pain, leg cramps, morning sickness, heartburn, round ligament pain, and much more get worse and show up much earlier in each consecutive pregnancy. No joke, the day morning sickness hit I looked at my husband and reminded them that I was never going to do this again. He understands. He has seen me go through each of these pregnancies and their symptoms.

The people who don’t understand are the ones who haven’t walked this rode with me. I have been very vocal about our decision to be done having kids after this pregnancy from day one, even after we found out we we’re having another girl. Some people understand and are supportive of our decision, others can’t help but interject with their opinion.

“You have to keep trying till you get a boy.”

“Oh, but your stopping so soon.”

“You’re going to regret it.”

What I’d like to know is what’s the magic number on how many kids someone is suppose to have and how many of each gender are there supposed to be? People talk as if this is predetermined and applies to everybody no matter their circumstances. Forget the fact that we have absolutely no control over gender or if we can get pregnant multiple times (besides IVF). Not only that but you have the opposite side of the coin where you have families with 4 or 5 kids and if that mom gets pregnant everyone’s judging her for having a big family. It feels as if there is no winning in today’s world. You either stopped to soon in your quest to bring life into this world or you’re having too many kids and you’re the cause of our overpopulation crisis.

Honestly this needs to stop. If someone says they’re done having kids, accept it and stop telling them they need to keep going. You don’t know their journey or reasons, and besides that it’s none of your business. If someone says they don’t want to have kids, accept it and stop telling them how much they’re missing out on. You don’t know their reasons and it’s not your life. If someone doesn’t talk about having kids but has been married for years, please for the love of all things holy, don’t ask them when they’re having kids. Many of these couples want to have kids and have been trying for years with no success or with many positive pregnancy tests that unfortunately end in a miscarriage. You asking, is a reminder of this heartbreaking journey they are walking and, once again, is none of your business.

Having one, ten or even zero kids is a huge decision, and I can promise you we aren’t making it lighthearted. A lot of time, thought, and our personal experiences are coming into play. Just because having 5 kids was the right decision for you and your family doesn’t mean it’s the right decision for everyone else. Just because you have both genders in your line up of children, doesn’t mean we all should. Just because you decided kids weren’t something you wanted, doesn’t mean everyone shouldn’t have kids. Your experience, your desires, your journey, and ultimately, your decision. End. Of. Story.

I took Plan B. Here is my story. #prochoice #women

The way our lives crashed together here in Idaho h

Why not speak to us who are actually deconstructin

Making clay earrings has been a wonderful self-car

My deconstruction journey has been wild. Being rai

Did this confuse anyone else, or was it just me??

If your head is spinning with our chaotic life and