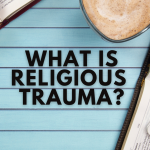 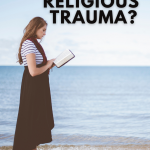 I’ve been asked multiple times how religion in general can cause trauma. I get it, it’s hard for some people to see something they have experienced as good and wholesome in a way that’s harmful to others.

Unfortunately, the reality is it can and does.

So religious trauma usually comes up when someone starts questioning their long-held beliefs that have led to them being indoctrinated in their faith. For the most part these people are coming out of more fundamentalist and controlling religions, but not always.

The level of religious trauma one experiences can vary depending on the person, what kind of religious environment they grew up in, how indoctrinated they were, if their family is indoctrinated as well, what their religious beliefs are, so much more.

For the most part Religious Trauma comes up when someone starts doubting or questioning their beliefs. When those doubts turn into changing beliefs, we call that deconstruction. Some people deconstruct themselves all the way out of religion. Some deconstruct but then reconstruct to build a healthier view and relationship with God and themselves. Both ways are healthy and acceptable.

One of the pioneers of Religious Trauma is from a woman named Marlene Winell. She has her Ph. D in psychology and in 1994 and wrote a book called Leaving the Fold. The book is still in production and sells tons of copies every single year.

Marlene herself grew up in fundamentalist Christianity and in college started to experience a world outside her “Christian circle” and eventually she deconverted. Through her own experience with Religious Trauma it led her to do some of the most phenomenal work pioneering the field as we knew it today as Religious Trauma.

From someone who jumped into deconstruction about 2 years ago I can tell you this list is spot on. For me I experienced 11 out of the 14 symptoms listed above. It was one of the hardest and trying times of my life, and to be honest I’m still walking through it.

When we think of trauma, we usually think of some kind of catastrophic event, someone coming back from war, or being physically abused in some way. The thing about Religious Trauma is it’s, for the most part, emotional and developmental.

That doesn’t make it any less impactful on your life.

Now I get that it’s not all churches. There are many congregations, especially progressive ones, out there that are aware of the harm some religions and denominations have caused and are actively trying to do better.

But none the less, religious trauma is real and many people are suffering with it.

Unfortunately, even though there have been professionals working in the field for decades, Religious Trauma is still underrepresented by mental health professionals.

As a Religious Trauma Recovery Coach that’s where I come in. When I was seeing my therapist during my deconstruction it wasn’t bad, but she didn’t understand deconstruction. It was great to have her help me through other childhood trauma but the most growth I got during this time was from my Life Coach who was also deconstructing. Processing with him helped me heal immensely.

If you’re suffering from Religious Trauma I would love to help you find a life of happiness beyond your trauma. Feel free to book a free consultation here.

Religious Trauma can be debilitating but you don’t have to walk this rode alone and it won’t last forever!

« Do you know your ACE score?
I Don’t Lead People to Jesus… »

I shared this on Tik Tok over the weekend! The lov

Got a new hair cut and went wild with an undercut!

No I’m not thankful for my trauma. #trauma #trau

When you’re bi but get invited to the neighborho

I felt a little 🌶 this morning. 😁 #polotics