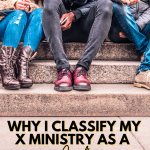 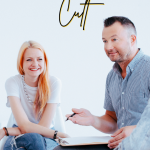 Since I posted my story ‘Escaping a Cult’ I have gotten a mix of feedback. Most of it has been overwhelming support and encouragement, and when I say most, I mean like 95%. The other 5% were mixed.

1% disagreed with my opinion and hated the fact that I went public with my experience. The other 4% agreed with everything I said except they felt the world ‘cult’ was just too strong of a word.

I get where the 4% are coming from. It took me 2 years after leaving to finally admit to my husband that it was a cult. It took another 2 years to even speak it out loud to other people. And then another 4 years to even remotely mention it in a public or semipublic setting.

When someone thinks of a cult, they automatically think of something like James Town, Scientology, or The Branch Dravidians. The thing is cults can come in many shapes and sizes. Just because one group has 50 members, and another has 300 doesn’t mean one is more or less of a cult than another. A group with 50 members can have stronger cult tendencies and fit more or the red flags than a group of 300 and vis versa.

The commonalities between cults aren’t based off numbers, area, or time spent together. They have some of all of the key red flags. I’m going to list off the 7 key red flags and if one fits the x ministry, I will explain a bit more below it.

1. High level of commitment from members.

We were all expected to have unquestionable loyalty and commitment to the ministry. Heck we even had to sign a covenant. If that doesn’t scream high level of commitment, I don’t know what does. Not only did we have to sign a covenant, but we were expected to be there for every services or trip we had to take. We were highly encouraged to take off work, no matter how bad it made someone look to their boss. Some were even told to quit their jobs and find new ones. We were also HEAVILY encouraged to sacrifice our wants, needs, and desires, for the betterment and advancement of the ministry. I was made to feel that even visiting my family or joining the marching band at my university wasn’t ok since it would take time away from the ministry and I would miss our Saturday night services.

2. Unquestionable loyalty towards leaders of people at the top.

We were never asked or expected to put our leaders above God, but because of how the ministry worked many of us did. When we would ‘mess up’ we would instantly think, “Oh no what will the leader and his wife think of me?” We were highly focused on pleasing them and feared disappointing them so much that we ended up putting them above God himself. I brought this to the attention of the leader and his response was, “It’s ok to want to please and not disappoint your spiritual leader.” He glossed right over the fact that I said I was feeling like I was putting them above God.

If I could only pick one key red flag this would be it. We thought so highly of ourselves that we would have probably said our shit don’t stink. We looked at other Christians as less than and put ourselves above everyone else because we truly believed we were doing more for the Lord and everyone else was just lukewarm Christians waiting to be spit out. We would laugh when other people called us a cult and it actually just put fuel to the fire. We stood on our mountain top proclaiming that we were being persecuted just like Jesus. I’m sure some of them are still saying that in reference to me speaking out.

4. Those who leave are shunned.

Every. Single. Time.
It doesn’t matter who you were or how long you knew the leaders, if you left you were shunned. All the other members were (without being directly told to) encouraged to do the same. I remember when a couple left and a few weeks or maybe a month passed I reached out to them and told them I missed them greatly. When it got back to the leader what I had done he told me that this was my weakness and I needed to work on it. He explained that my need for friendship and my inability to let go wasn’t good for me and I was just seeking approval once again. (That line was told me TIME AND TIME AGAIN!)

5. Critical thinking is abandoned. Member’s don’t question what is being told because it will be see as betrayal.

I think this was true for select members, not all of them. There were things that were told to me and others that we just didn’t question. Maybe it was because we didn’t want to be seen as an outcast or we were too young to put two and two together. My guess is the later. I think if I would have been mature enough, I would have been able to call the leader on his BS when he told me if I left, I was giving up on my family’s salvation.

6. Made to feel dependent and becomes your whole environment.

When I chose to leave the ministry I lost everything. I lost the home I lived in, I lost all my friends, I lost my job, I lost my schooling, and I lost my church. Now they weren’t sitting there controlling these parts like some marionet, but they were defiantly all connected in some way to the ministry.
My boss at my job was a ministry member, my best friend was a member and I lived with her family, every single one of my friends (minus 1, Love you Tory) were ministry members, the leader had connections and was the only reason I got accepted into my university, and of course my church was the ministry. My choice to leave was hard because I knew that when I walked away from the ministry, I inevitably was going to have to walk away from everything. Everything I knew, everything I had built, and everything I had believed was going to come crashing down like a house of cards barely grazed by the wind.
One time when I, unsucessfuly, tried to leave the leader asked me where I was going to go. The meaning behind his question was clear. If you leave you can’t live with your current family. If you choose to walk away, you’re going to have to walk away from everything. I mentioned a married couple I knew from my old church that have supported me and poured into my life many times. He responded with, “Then maybe we need to cut them off.”

7. You think what you’re doing is for the betterment of the world.

Every fiber of our being believed that what we were doing was our calling, destiny, and that we were going to change the world into on fire believers wearing camo and black t-shirts. Now don’t get me wrong I think we’re all called to change the world for the better, but I think that looks different for every person. We’re all unique and God has given us all unique abilities, callings, and arenas of influence. In the ministry we were told to lay our desires and dreams at the feet of Jesus and sacrifice those parts of our lives to further the calling and mission of the ministry. When this happens, we are narrowing our field of focus which diminishes the amount of people we can impact and love on.

Now as you can tell we weren’t a cult that stocked guns and ammo, we didn’t have a commune, we didn’t believe the government was out to get us, the men didn’t have multiple wives, and we didn’t marry our children off to old men.

So yes, we weren’t an extreme cult by any means, but we defiantly had some strong tendencies and for most of the members, those tendencies can’t be denied.

« The 10 Year Letter
Why Setting Boundaries Is Healthy & Necessary »